Don Anderson and Friends and the Eagle Flies in 1972 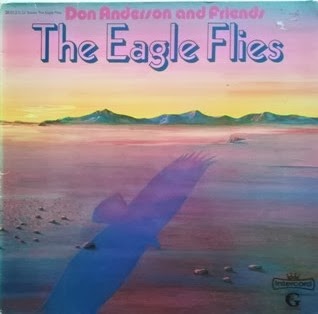 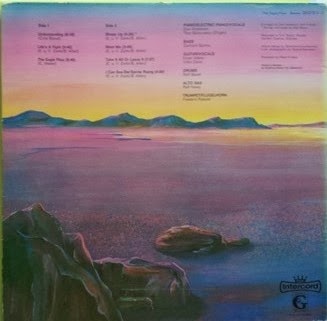 Occasionally one comes across an album that vaults into the position of a personal favourite, perhaps due to quirks of the songwriting that especially appeal to one's taste, and subsequently in one's own musical rotation it circulates regularly and repeatedly.  This is such an album for me. I confess it's not the most progressive album imaginable, but in its perfect use of early seventies grooves, its Santanaesque energy, and particularly the wonderful depth of the singer's art, it's a small masterpiece in its own style.  I feel it would only be right for me to share my enjoyment with others rather than keeping it to myself.  It would be too much to hope that one day these fabulous songs could be heard on the radio, even satellite radio, for which media they are absolutely perfectly suited in fact, but at least I can feel comforted somewhere out there someone else will be singing to themselves these same great lyrics.

First some quick facts.  Don Anderson was Edo Zanki.  The blurb from discogs states: "Croat musician, vocalist and producer, born 19 October 1952 in Zadar, Yugoslavia (presently Croatia).  He moved to Germany with his family at the age of 5."  Prior to this record he made "Feelin' Alright" which in my opinion is not to the same high quality.  Notice that after reverting to his birth name he made several pop or rock albums later in the seventies.  I have no idea what is their musical value but am curious if anyone might know, particularly I wonder if he hit his peak in the early or later seventies.

These records remind me of the Australian band "Pirana" well-known to progressive fans.  The interesting songwriting combined with the slightest Santana influence and the great funky energy were typical of the seventies.

The wonderful title track, The Eagle Flies.
"I been talking to some friends, they been telling me words like 'communist infiltration' then I knew I had to start thinking--
The war keeps on rolling, the eagle flies, no one thinks of the reason why..."

Now the track Meet Me, with its gorgeous major third chord progression on guitar resembling a Keith Richards riff, complemented by electric piano, I could listen to all day over and over again.  And the George Benson-like guitar solo!  Is it possible for rock music to get more heavenly?  Not to me.

Listening to these words loudly in my car, I am transporting back to those wonderful days, the blissful hopes of the times mixed with the anxiety of the social revolutions going on everywhere.  And the creative excitement I believe was perfectly reflected in the energy of the rock music of the time, which is sadly absent today.

But how appropriate are those same words in the present, forty-one years later, with the United States still involved in conflicts all over the world now under the banner of the war against terrorism instead of the war against communism?

Yes, the war keeps on rolling, the eagle flies, and no one thinks of the reason why....