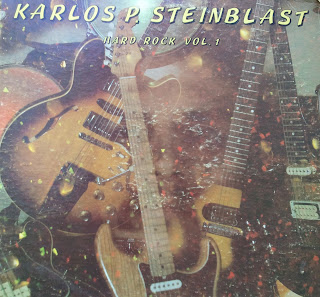 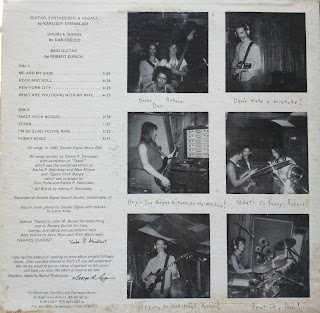 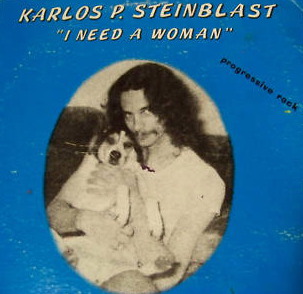 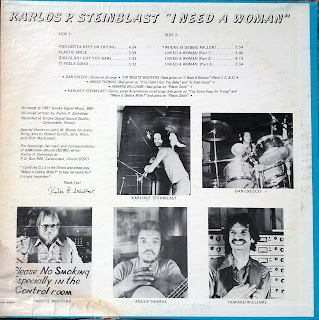 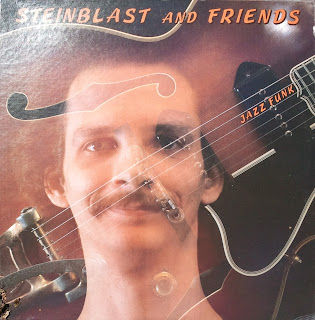 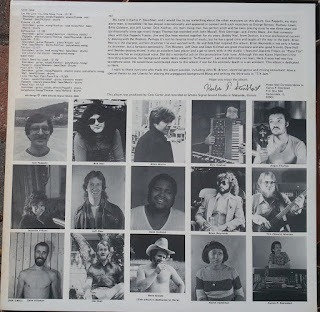 I was surprised to see the last official album he made, Steinblast and Friends' Jazz Funk, is not more known. It's not as good as the first two hard rock titles, but occasionally the same invention shines through, as on the track in 7/4:

He's interesting too for uniquely American reasons.  Starting off as a typical stoner rocker with a great deal of admiration for Led Zep presumably in the well-titled "Hard Rock Vol.1" and in his second explicitly stating his primary reason for desiring fame: "I Need a Woman," he later toned everything down in the Jazz Funk record.  As commenters have pointed out, he was already religious (for example at his concerts he lectured to the audience) but subsequently became an all-out born again Christian and transformed himself into a genuine preacher, which is his career to this very day.  He has continued to make music, but it's a little watered down by the religious influence.  It would be wonderful to know what he thinks today of his first, masterpiece album.

We have to admire these dedicated or perhaps stone-crazy American artists like Karlos P. Steinblast who continued making progressive music into the eighties when it was completely unfashionable and unsustainable.  He even proudly proclaimed it on the cover: "progressive rock" -- pretty uncompromising, or perhaps stoned lacking in sobriety, to fly his freak prog flag so high.   It was a style already uncool by the late seventies as far as I've read.  Yet this record is full of references to how he'll gain fame and groupies, though it hasn't happened yet: dear cadillac-driving Karlos, why not copy Duran Duran?

When you look at this guy if you're old enough you're taken straight back to childhood and those crazy over-hairy days, those lazy over smokey-and-the-bandit days of stinky herbal park benches endlessly discussing Jimmy Page versus Jeff Beck, while 'Eric Clapton is god'.  His best record is actually the one that came before, the first, called "Hard Rock Vol. 1".  I will post also the third one, "Steinblast and Friends" which demonstrated a bit of deterioration in quality, not the best friends to have around maybe.  Notice that the "I need a woman"  Suite from the second transforms into "I don't need no leash" in the next record, a year later - how many of us men have felt the same way one or two years into marriage?  check out some of the lyrics for that one:

To focus on the track "Where is Debbie Miller?" is to be taken back to those hazy redolent five-leaved days of 1981 when all was denim and possible, droppable, inhaleable, when big fat psilocybin-fueled dinosaur America still ruled the world of cars with its carboniferous chevys, massive mustangs, trashy trans-ams; it's the story of Debbie Miller, a teenaged girl who witnessed Karlos get run over by a Cadillac: "he's squashed, baby, between two cars!!!" -- when the PO-lice came, of course, she had to run away because she was 'jailbait'.   But here's the best part; halfway through the song, he suddenly starts asking "Where's my kazoo???  Where's my kazoo????"  --and then he plays the kazoo!

On the back of the record, this plaintive little note from Karlos: " Could the DJ's in the Illinois area please play 'where is Debbie Miller' to help me locate her? It's very important! Thank You!"

But yeah, that's what it was like back then in the late seventies early eighties.  People tell me.  The American dream-- Morning again in America.  America the beautiful, America the great, home of the bald eagle and the toupee'd presidents, Stars and Strippers forever.  Come back to the 5 and dime, Jimmy Dean, Jimmy Dean, the Boulevard of Broken Dreams has led you to the Last House on Dead End Street, but now night has fallen and as Mao once said, for us to soon see, " it's never darkest till it's completely black " ...

Regarding the first album:

This is by far his best work (and indeed one of my favourite guitar-rock albums from the US) featuring some really raw, psychiatric and hard-assed guitarwork-- moreover, most songs are quite progressive and each in its own uniquely bizarre way.  The one thing about this album is the late year-- you'd think most of this material was written 5-8 years before, especially given the Led Zep-influence that seems to be omnipresent.  )

Let's just have a listen to the first magnificent masterpiece track, "Me and my babe--"  wherein Karlos  stays at home with his babe gettin' it on:

--showing he was a peak oil believer 25 years ahead of his time-- but then the song goes:

"Costs too much to go nowhere--
I don't wear no underwear"

--this is truly an insane genius deserving of immortality.   As I said, each track has its own interesting twist: the spacey funk that starts side b, the fast instrumental riff that follows (called Stabb, sampled below), recalling perhaps the Frankenstein song by the Edgar Winter Group, the lament for being stranded in New York City, the "I hate disco" song that sounds so beautifully quaint today, esp. with the utter dominance of 'dance music' in today's world... again note his wonderfully original guitar-playing style, often using chunky chords punctuated by fast riffs to interconnect phrases.