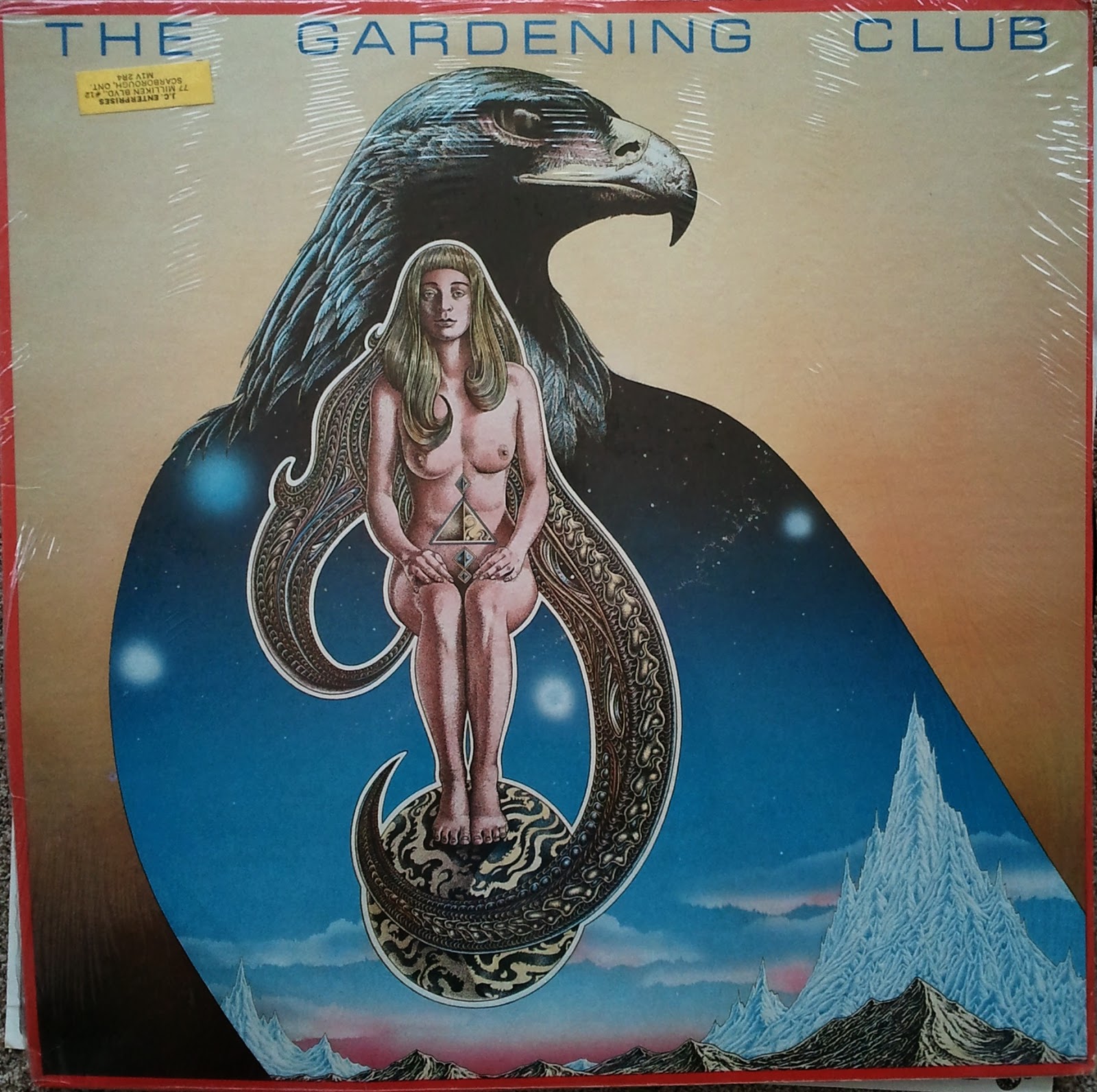 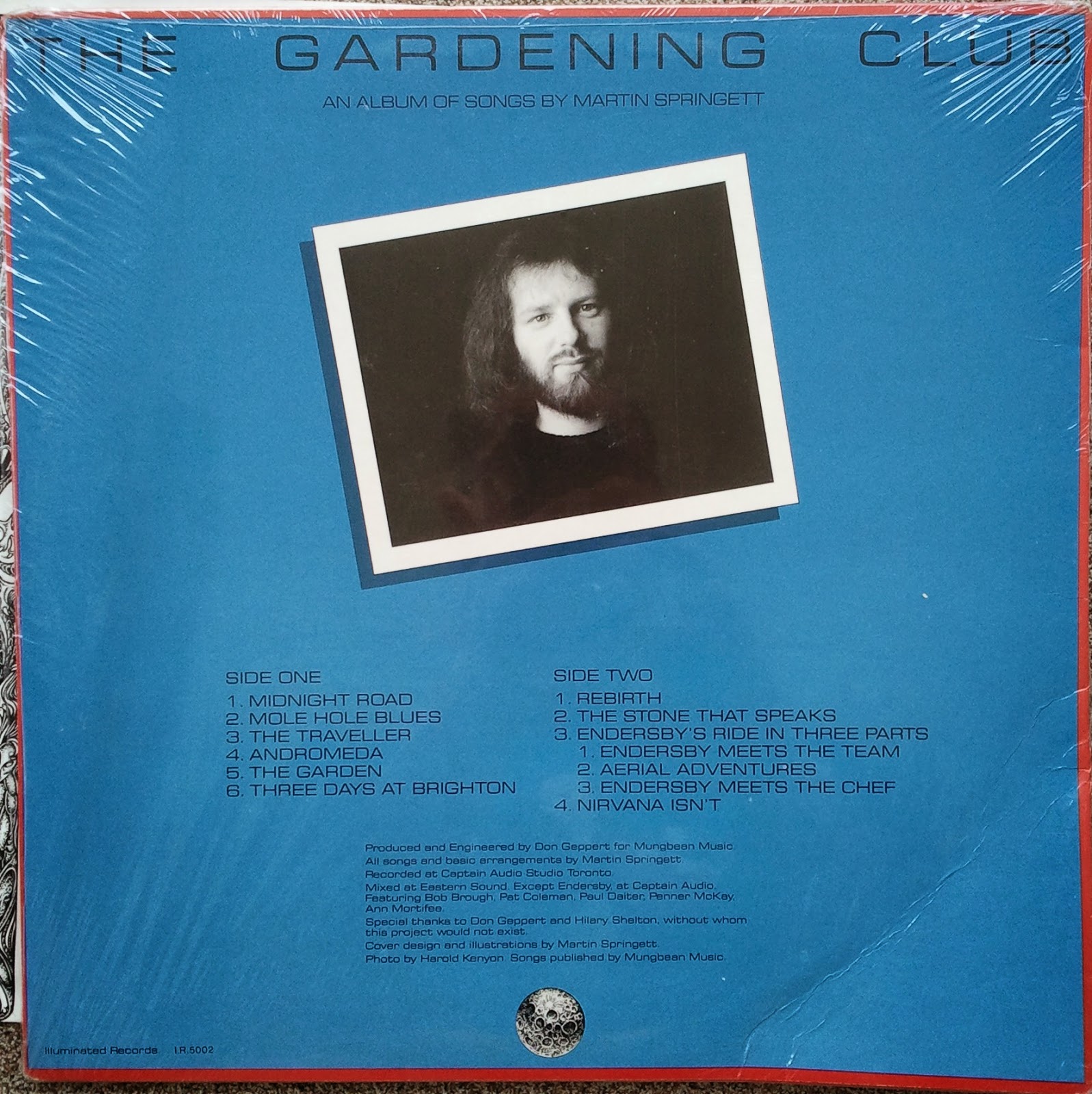 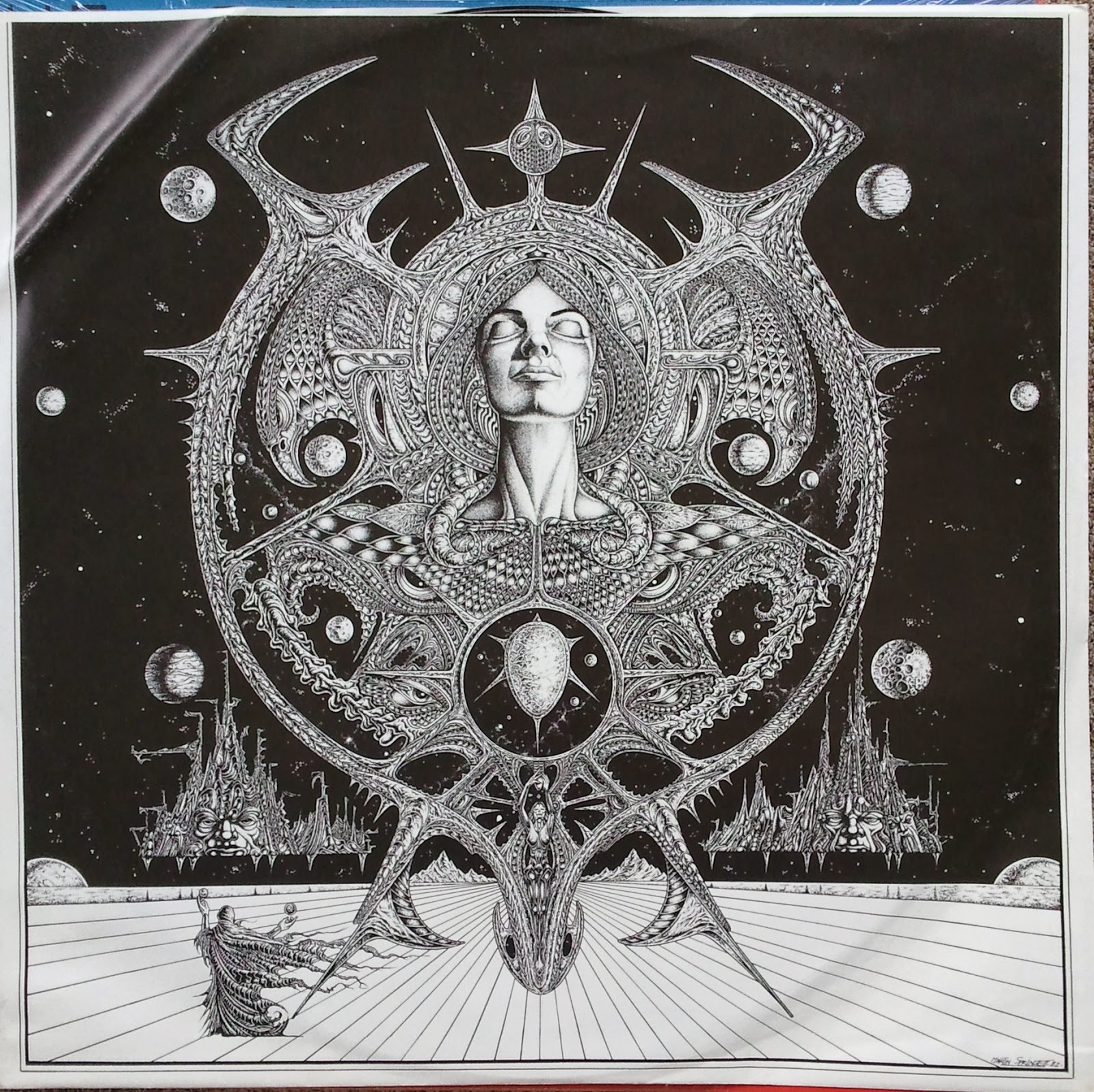 Amazingly this time the cover illustrations and art are from Martin himself, a British artist who worked and recorded in Toronto, Canada. You can see how remarkable he is as an artist, pictorially as well as musically.  And ironically for us, it's the former inclination that won out in the end...

Now this is that classic prog rock sound that we all love so deeply and dearly and for this reason I present it to you on the one-year anniversary of this blog as a special treat.  As usual we get the space lyrics, the quirky material ("Nirvana isn't what it used to be"), the mythological themes, the cute-bombastic singing passages, the fusiony bits ("Enderby's Ride"), the electric guitar effects like phasing, the sudden variations within a song, the diminished chords ("The Traveller"), the shockingly weird and twisted melodies ("Rebirth"), the long-length composition that changes constantly, all on a beautiful rock base that provides that vital, vivid electric energy we love so much.  Of course we're back to the masters of prog, Genesis, here.  And it's wonderfully refreshing after all the fusion, library, and folk we have had to plod through lately. (I don't even mention electronic music which I have no taste for.)  And guess who else appears on this record?  Our old favourite instrument, the mellotron!

A good example of the prog moves, "Andromeda," which could be an anthem for prog, note in particular how it changes two-thirds of the way through to a kind of fusion-space opus:


Another track among many ("The Garden") that really shows his Genesis-debt:


Oh how I love that twelve-string guitar sound Genesis perfected!!

Huge bonus: Martin crammed 50 minutes of music into this one record.  More information can be found on the preceding discogs link.  It's great to discover a semi-masterpiece like this that is not well known, even among the cognoscenti: cf.  RYM.  And btw the aforementioned long composition, its full title is "Enderby's Ride in Three Parts," is truly a masterpiece within a masterpiece, a real stunner of a progressive opus.

I guess the problem with this record was the year of release: by 1983, prog was totally dead, autopsied, cremated, interred, its dust scattered to the four corners of the (g*ddamned) record industry's world, and the sound on this album is from 8-10 years before at least, with not a hint of new wave, casio keyboards, drum machines, etc.  I still remember my friend at the time telling me acoustic musical instruments were dead, from now on everything will be synthesizers, fake drums, computer-generated beats, etc.  (Of course his prediction ended very quickly, within ten years all those old out-of-date instruments were back with a vengeance when alternative broke.)  Martin obviously was one of those utterly uncompromising artists who didn't give a hot crap what was fashionable at the time...

Subsequently, note from his personal blog that he pursued the illustration side of his talents as opposed to the prog side.  Yet for the latter I want to thank him from the bottom of my heart.  What a brilliant, brilliant artist.


And Prog, I love you.
But you knew that already.