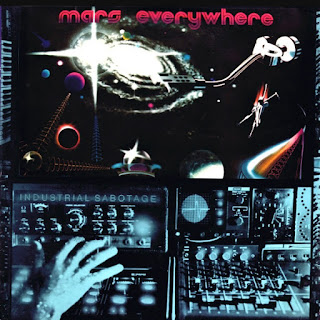 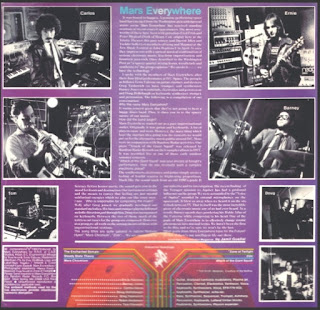 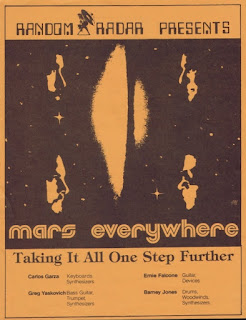 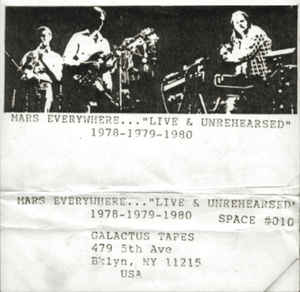 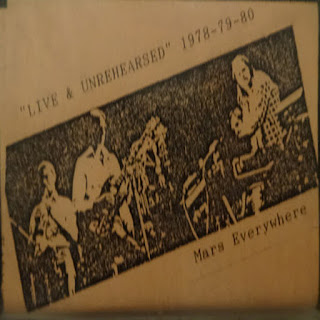 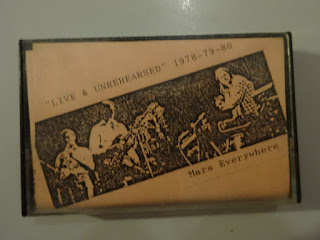 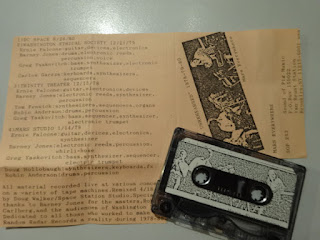 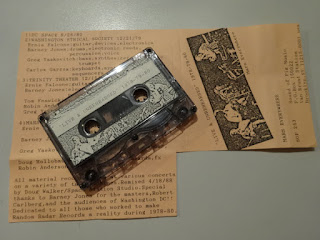 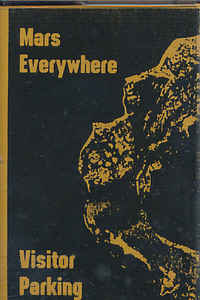 Obviously, this band is famous among the prog cognoscenti (currently numbering 11, with the loss of one fan to the Bieber Believers) for the wonderful mix of electronic and more advanced rock compositions on the 1980 album Industrial Sabotage.  What I'm betting others out there don't realize is that there is more material, of lesser quality admittedly, to listen to, and live performances from the seventies.  Specifically, compared to I.S., there is more of the meandering electronica to wade through or to contend with.

First of all, as usual, from cd reissue:

Random Radar is the ancestor to the popular Cuneiform Records label. They had some interesting acts, but none were more intriguing than Mars Everywhere. The music here is a cross between, Canterbury (due to The Muffins influence), space rock, avant prog and free rock. Gets a little loose and annoying in places, but when they catch a groove, the fireworks are undeniable. Some brilliant guitar work, and it's just this space rock element that becomes the album's ace in the hole. Worth tracking down. (Priority 3)

I don't think there's any need for a sample track here from the original album (artist databased here).  If anyone hasn't heard it yet, I beg you to grab it and listen to it-- fast.  I've known this release for many years and have loved it for as many so it came as quite a shock to find out there were other recordings released and available: not one, but two separate performances.  First of all, there is the 1989 cassette of live from 1979 to 1980.  Some sparse information can be found here.  A helpful annotation below:

You can see that most of the tracks from the original album appear here.

From the 1979 Trinity Theatre set, the Twilight Zone homage gives you an idea of the 'meandering' space rock sound of the band which appealed so much to Tom Hayes (and also the poor quality of the recording, which I despise):

Then in 1989 the band came back to the studio because they obviously couldn't take no for an answer, with another cassette comprising three very long tracks of electro-space rock.  I can't sample it due to the lengths (first track, Calling Bats, is 47 minutes long).  Suffice it to say that it's very similar to the live cassette, dissimilar to the original 1980 Industrial Sabotage release, in lacking tight ideas, and because I don't have a taste for 'space rock' (guitar meandering in one key, usually E or A), and experimental electronic doodling, I didn't much like it.
Them bats with the ultrasonic hearing probably loved it though.


Labels: Tom Hayes and the cdreissuewishlist