Unknown Swiss progressive outfit Sisyphos in one of their many albums, Mujokan 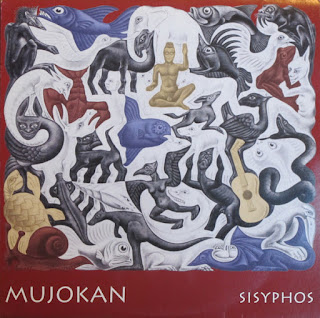 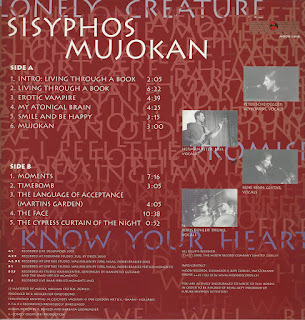 Overall, very similar to German Iskander with the advanced, nicely rocking (up the hill and back down again ad infinitum) progressive symphonic, almost always featuring electric instruments, usually two well-tuned and loud el. guitars.  (An update on Iskander, for those who actually read my postings / rantings.  Someone mentioned in comments there exists a CD release of their masterpiece Boheme 2000, and indeed there is.  You can see that here.  This CD has bonus tracks, making up more than half an hour of extra unreleased music that is off the charts excellent progrock, and for this reason I strongly urge you guys to locate a copy and compare with the vinyl rip I (once) put there.  Really, thanks for these suggestions, sometimes, like in this case, they are right on the money!)

It's quite shocking both how prolific and therefore how underheard these guy are, to this day.
First of all look at their discography, beginning 1981, shortly thereafter crossing through into the CD world, 30 years later transitioning into the digital world and ending only a few years back with 2009's Retromania.  In total, 8 albums listed.  There's a couple of caveats here the most important being that they had an unfortunate tendency to recycle certain tracks, admittedly often good ones, and sometime changing their names, which therefore trespasses further onto the territory of annoying, like a friend you like who eats all the leftover meat-lover pizza you wanted for breakfast.  But you couldn't say no when he asked because it's not polite so instead you just complain to your wife who rolls her eyes and walks away.

There is tons of information relating to these guys online, starting with discogs:

Profile:
The band Sisyphos has been playing in the same formation for more than 30 years. Their music is somehow a reminder of the progressive rock sound of the seventies as well as of classical music – spherical music but with a hard rock touch, which is transformed as rough as it is produced.
Members: René Senn (Guitar), Boris Bühler (Drums, Vocals), Herman Peter (Bass), Peter Scheidegger (Keyboards, Vocals)

Sweet but accurate blurb, gets to the heart of the matter for sure.

On this LP the old almost 19th century style vocal composition The Language Of Acceptance (Martins Garden) is superb:

The first chord, which is added minor 6th on top of the G7 (resolving to the key of Stevie C) with its harmony vocals, just gives me chills, referencing as it does the old pop tunes I heard as a kid blasting out of the cabinet-sized radio/amp/turntables we once had, but this song is so much more than a nostalgia homage ode, as it changes through various keys and sounds, never straying from the darkness and sudden turns down strange alleys.  Keeping it together is a melody that climbs up and down like Sisyphos's rolling rock over a couple of octaves even as the song ostensibly in the genre of pop promiscuously accepts all classical influences in its chords and structures.  To me this is really a masterpiece composition, automatically making it to my top ten list of best progressive songs heard in the last year.  Hopefully you will enjoy it too.  And thank you for that, Sisyphos guys...


Now back to the discography.

I've listened to all their albums by now and can tell you that in the beginning they were almost plain hard rock with some, but few, inventive changes, always eschewing the standard rock progressions of I IV V or its inverted form of V IV I which was clicheified so badly by the Rolling Stones, but nonetheless not much prog.  As far as I remember, most of their songs were even in E or A back then, sometimes G.

But after the 80s period they had a change of heart almost and went the wrong way completely-- the right way for us-- in the direction of more prog, and in 1996, the year alternative ruled the world, they came out with an album called Moments that to me is their masterpiece for all time.   And it's really shockingly good, made more so by the fact I had never heard it, or heard of it, until quite recently.  And I thought I knew all about prog!  What about you Tom? You knew?

Virtually the same album was made into a live release shortly thereafter, and today's LP called Mujokan came next after, in 2002.  Of course it must be that these true heroes suffered from their dedication to the old school vinyl format, since I see from the info there was no CD release of this particular work.  But that doesn't matter to you guys: here it is, digital and easily consumed like baby food but with all the flavours of adult mature mastery...

Mention should also be made about the album called Exit, by 7Pines which is Sisyphos keyboardist Peter Scheidegger in a trio with even more classic progressive rock nitrogycerine blasting out all the hallmarks of the genre: odd time signatures, original chord progressions often in minor seconds, crazy unison arpeggios in fourths, fast runs of atonal 'melodies', prolifically tossed minor seconds and tritones in every song-- etc., etc.