Ted Moses And The Mother Necessity Big Band in More Than Ever, from Canada, 1978 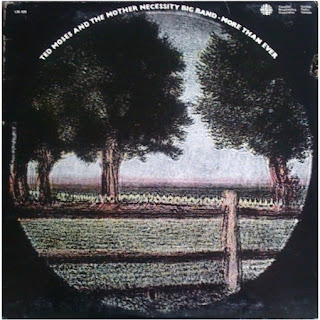 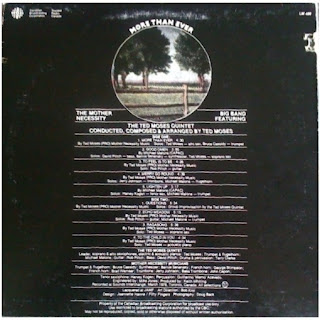 Just a gorgeous set of big band playing progressive fusion from a Canadian composer / pianist called Ted Moses, who shockingly, also plays the saxophone!  A very multitalented man, he made two records earlier which are strongly recommended as seen in the database.  They are not expensive but they are utterly unknown, undeservedly so, & I urge you to seek them out.  In this LP accompanied by his quintet he is joined by the unwieldly-named Mother Necessity Big Band in a Canadian CBC (like BBC, state broadcaster) production.

Listen to one of his trademark styles, the bass arpeggios topped by completely inappropriate chords (perhaps, CMajor7, Bflat9, Am6, Fm), here played on electric guitar on the left and electric piano on the right, on the track To the Child in You:

Subsequently that muted trumpet (Michael Malone channeling Miles Davis) plays the smooth and even-tempered melody so warmly and generously, building up to a full-orchestral climax but then, 3/5ths of the way through, we go up a second and modulate to a double tempo coda to take it out.  This is far superior as a 'crossover' between progressive music and big band jazz than other albums I've posted in the past such as the Northern Illinois University group, mostly thanks to the strength and originality of the compositions.  God bless my friend for digging up this time-maligned artist!

Notice as well Ted played keyboards on the famous Canadian progressive work, Ken Ramm's Dragon, which hopefully everyone reading this is familiar with already.

Some rather interesting information regarding this artist can be found here.  He was actually born in Tulsa, and returned to that city in 1997, to play jazz there. In his own words:

"I lived in Toronto a number of years," Moses said before the band's debut gig last Sunday [in Tulsa]. "I had a quintet, a 12-piece and a 19-piece big-band there. I had two clubs in Toronto, both called the Mother Necessity Jazz Workshop. The first one lasted a year, and then the people who owned the building sold it out from under us. A month after we closed, we got a $10,000 grant from the Canadian government, but since it was earmarked to pay musicians only, we couldn't use it to save the club."  Later, he tried again, opening a place that featured live jazz seven nights a week. An artistic success but a financial liability, it closed after six months. At the same time Moses was struggling to keep a club going, he was being recognized as a major jazz-scene influence in the Canadian city, forming jazz organizations, giving local musicians venues to play, and composing, arranging, performing, and teaching workshops and clinics...