US country rock band Spruce from 1975 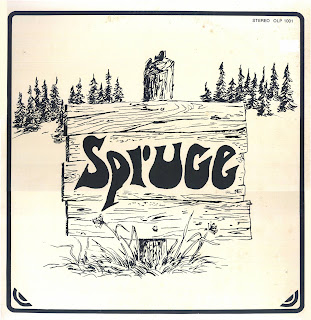 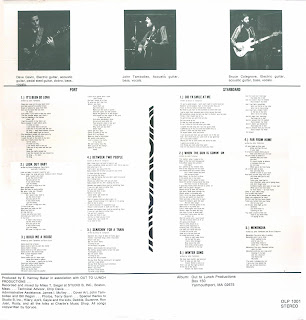 From Out to Lunch productions OTL 1001 indeed, we have this wonderful outfit from way out in deep time US of A 1970s.  For once, discogs has a review that is good and spot on:

Real high quality rural rock private press recorded in '75, with some very talented guitar playing. Many different influences across the LP, from Allmans, CS&N, Doobies and New Riders of Purple Sage to Batdorf and Rodney. Exceptional recording job for a private yields great sound. Most of the material is gentle, uptempo stuff that is easy on the ears. With a little more exposure at the time, this probably would have gone places.

The best Winter Song I've ever heard in my life is right here:

Starting with that adorably simple 4th - 5th interval acoustic riff, quickly revealed to be over a Csharp minor chord, the song moves through some really ingenious chord changes from major to minor, but the most attractive thing in a very pure and cohesive whole is the double harmony vocals of the singers which adds such a delicate dimension.  Reminds me a bit of my old and perennial favourite band Sand too in their first album.  Listen through to the end with the heartbreakingly pretty outro singing"it's snowin'."

Notice one unusual aspect of this LP is the complete lack of any percussion.
When you listen to the track called Memsha think of how it seemed those masterful bluesy country rock days seemed like they would last forever, but instead were fated to end very shortly come the next decade:

Thanks for those beautiful finds, my friends, and keep 'em comin'...

Btw I had never heard of the duo mentioned above called Batdorf and Rodney so I looked around to find their three albums, and it turned out all three are hugely enjoyable, starting with a more stripped down CSNY or America (the famous pop folk band) sound, continuing with more arranging and commercial sounding well-crafted songs and in the last album really hitting it out of the ballpark with great tunes.  And it's amazing that after a lifetime listening and actively seeking out this period of music there's still stuff at such a high caliber that I was never aware of.  So I'll include their stuff below for those who might not have heard of them either.