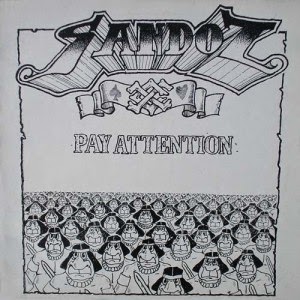 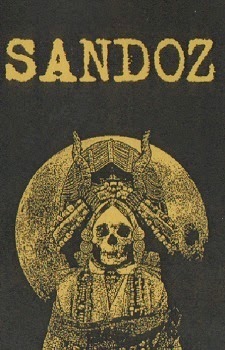 I think we can all agree the retro look of the first album cover is clearly superior.

From the above you can see that the original recording, which was made in 1971 for sure since it has that raw edgy High Tide / Gnidrolog insane sound to it, was not highly popular.  Why not?  It featured completely out-there riffs and poetry that is a little bit like today's death metal, that is, almost meaninglessly beautiful crazy-talk.  Below I will try to transcribe the gorgeous poem "Apple Core Machine" -- the title doesn't tell you what the song is really about, in a wonderful piece of artistic subtlety, only the second line, which is "Man core machine" reveals that the lyrics are basically lunatic ranting.  And it also reminds me of another crazy guitarist/composer, the hugely underrated Karlos P. Steinblast who did the magnificent Hard Rock Vol. 1.

Moving on to the first track, Apple Core Machine.

Musically, what I love is that the riffs keep changing abruptly...

Blue mist, I hate to see you shiver,
we sent a lot of freaks down the river today.

You missed-- I'm here to deliver,
the one and only relaxation given today.

When you get home you can say
Sandoz took you away..."

Don't hide your youth from your brothers
or you'll wind up wanking in hell with the others.


I don't know about you, but this to me is pure poetry-- crazy poetry-- but still poetry.

In the second track check out halfway through when the bassist plays his background notes in dissonant seconds-- yes, really! something I've never heard before, i.e. he plays both D and E simultaneously for an entire verse, when he should only be playing the E. Were they all stoned at the time?  Yeah probably, where else does such creative genius come from?

One other thing I want to mention.  That first track really reminds me a lot of Kurt's Insecticide album, which came 20 years later (e.g., Hairspray Queen which can be heard here on youtube).  The mix of poetry and insane riffs is identical.  What a shame Kurt couldn't maintain the no-holds-barred experimental stuff that we hear on occasion, like the 12-minute coda to "Something in the Way" and in fact this to him was the greatest reason for depression, that he had to sell out instead of remaining true to himself as a poet and musician.  Would he have been happier in the end living in utter oblivion like John Goodsall?  I guess that too is hard to believe...


Which reminds me of my earlier comments regarding Karlos Steinblast...
Would you believe an  anon. commentator tracked him down?  Check out the amazing note from this anon.:


I think I found "Karlos P Steinblast": his true name is Karl F. Stein (see: http://www.copyrightencyclopedia.com/if-we-were-still-together-and-i-was-still-loving-you-hard/#b). I seems he had additional music published as Karl Stein in the 80's.

He is still based in Carbondale, Illinois and active as an evangelist, claiming to be able to heal people (see his youtube videos).

The good news is that he again makes music, which you can listen to at this page:
http://www.indieheaven.com/artist_main.php?id=90683&sel=6

Some of it is actually quite good (some cheesy synths and drum computer), and his voice and style is recognizable. Lyrics are religious, but the music interesting.

In his bio he says he has been a musician for a long time, but does not refer to "Karlos P Steinblast" at all. In the bio you find on the "indieheaven" site, he describes how he started preaching during gigs instead of playing the music, and that was a problem for his carrer (and the carrer of his fellow musicians).

Anyway I think this all gives new meaning to the comment on the LP cover: "Special thanks to .... for time, energy, friendship and psychiatric help."

From my point of view it is a little sad, but as they say: there is a fine line between genius and insanity. We owe some very creative work to people who are sensitive, nonconformist, but also unstable.


And I beg you to listen to those christian samples folks, because once you hear that voice-- if you know Hard Rock Vol. 1-- you will understand what I mean when I say this is the same guy, no doubt about it!

What a wonderful, and all so-American ending to this story-- the crazy guitarman who became a big preacher in South Illinois...