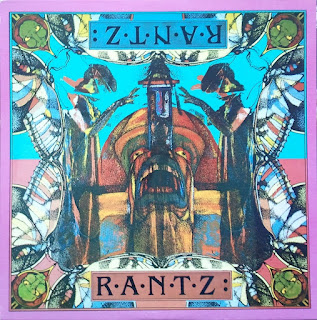 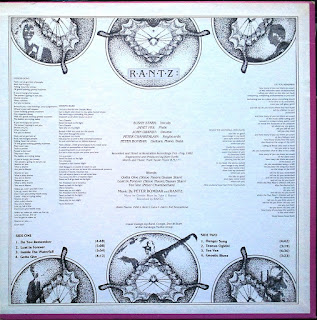 First off, note the beautiful cover art.  Although it can be rotated by pi, I don't actually see an image coming out the other way, though this is perhaps my visual fallibility.

This was another discovery from the mighty osurec and it hails from 1982, 31 years ago.  Why do I always harken back to those wonderful days of the eighties?  Why do I always remember the great late Ronnie Reagan with his doll-like rosy crabapple cheeks and glistening black courtierly pompadour shaking his head rhythmically while intoning the words "the evil empire" and "the mad dog of the middle east" from his teleprompter-- which used to fool my scientist father who thought he as an actor had actually memorized his lines--  imagine his chagrin when I told him POTUS was simply reading not looking the viewer in the eye... For little did my dad know that at that time Ronnie couldn't even remember his own name or the B-movie actresses he had slept with, let alone a long-winded speech by Peggy Noonan-Safire or William Safire-Noonan, full of idiotic and ahistorical platitudes.  But he was full of conviction, that same one that motored the McCarthy boat against communism to nowhere, that same certainty which in truth only true robots can achieve-- that the USSR must be destroyed at all costs, even with the creation of a star wars system of lasers in space that scientists told him from day 1 would never work.  It didn't matter to him that it wouldn't work, what mattered were the words alone, and the words worked.  To this day his words still work.  If millions of humans died in the process, the game theory mathematicians in service of politics said, it was worth it for the survival of the rest of us.  Too bad that game theory at that early point had not progressed to fully include cooperation as the optimal rational strategy-- too bad for us who don't understand game theory and were destined to die in those war games, right?
So I mean yeah, how can I not remember those crazy nuclear-holocaust-eighties with fondness?

After all, his magic religion of capitalism is still the spiritual altar to which we all pray.  We pray for the god of capitalism to make us rich, to give us luxury cars, to let us win the lottery (every day I go to work I hear someone mention this)...  We can grow our money like magic, if we just think the right thoughts.  And the priests, the economists, still stick to the script, they don't believe there is any other way for us, they assure us of a future cornucopia of abundance for all, with perpetual exponential "expansion" of the economy, in a limitless infinite earth that will accomodate 10 billion, even 100 billion humans (cf. Julian Simon RIP).  Now all bachelors can go on reality TV, become rich and famous, then have countless females to sleep with just like the heaven of Islam.  All women can have plastic surgery to make themselves as desirable as their evolutionary imperative instructs them to be, with large breasts, white skin, large red lips.  For a person to question our religion is heresy of course, they are laughed at in serious company, they are ostracized as childish or naive, they are talked down to as if stupid, they are universally ignored in any public forum.  In this way are religions perpetuated through falsehood and irrationality until the day their foretold or unforetold apocalypse passes-- like when the Comet Hale-Bopp passed by without a doomsday and the believers were forced to commit suicide.  Unfortunately our high priests the economists will not be immolating themselves when they are eventually shown to be wrong, they will simply stand in line for unemployment insurance and food stamps like everyone else, probably not even showing shame at their prior false promises or a full belly despite their financial wisdom.

And while I'm on the subject of doomsday (as usual!)  let me mention that all those cruise missiles, the creepy nuclear-powered subs patrolling the oceans that never surface, the thousands of warheads that would kill us all 'thousands of times over' in a nuclear winter as they used to say, they are all still with us-- Reagan and his warring legacy of words that work can still destroy us totally if there does arise a world war three.  Today it seems impossible, but what if there were worldwide famines and mass migrations for many years?   What if the recent economic downturn extends and gets worse and never ends, for anyone anywhere?  And how likely is it that these weapons will never be used, ever?  This seems very low probability to me.

[Interesting that in the 6 years since this was written the probability of nuclear war has gone up by so much.]

I include two fantastic tracks, the Indigo Sunset softer instrumental, and a hard-rocking guitar song that is virtually proto-alternative with punkish singing and incredible tritonal chord changes, nothing bluesy about it at all.


I wish Tom Hayes and cd reissue wishlist would feature this since I feel it should be priority 3 at least.  There is a wonderful mix of hard, soft, instrumental, no fusion, but a lot of ingenious composition and some killer tracks.  Reminds me a bit of Syn Cast the first Stone, but with a harder edge.

Why are these magnificent records so completely lost???
But this is our purpose here, to ressuscitate them and preserve them for posterity as the patrimony of our culture, when music reached its absolute apex of creation.  Assuming those nuclear warheads don't rain down on us instead in some distant future.

How interesting that I referred back to Syn here, in the same way I referred to Rantz yesterday.  I guess great minds think alike, especially when they're the same.  The fact is I think this is the better album of the two.