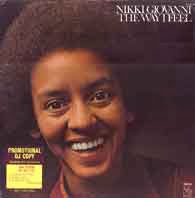 When I read prognotfrog's article about the amazing Radka Toneff I was reminded of how her unique talent was setting poetry to music in her own inimitable way. She seems to have been a fan of the American poet Nikki Giovanni because several of her poems became lovely songs in her hands. The originals from Nikki were sometimes given background music, as on this record, in which the (Turkish) American arranger Arif Mardin composed the music. I was hoping the level of quality of the background would be up to the standards of his brilliant orchestral fusion masterpiece "The Journey" from 1974, but unfortunately it was not to be. The music isn't even as good as the background for "The Prophet" which he wrote (in the same year I think) for Richard Harris' reciting of Khalil Gibran's The Prophet, which I do recommend people hear-- provided they have the patience to listen to Richard's quite annoying delivery (I'm always reminded of SCTV's comedy sketches in which they made fun of his tendency to alternate whispering and yelling in the same speech).

In comparing the tracks from this album with Radka's creations I have to admit the original suffers. Let's examine a few items in detail. In the poem "Butterflies" Nikki basically is describing how some sensual tactile experience leads her to compare the 'brown hands' of her lover to the given insect. To me there is very little of the craftsmanship one would expect of a great writer, being entirely built from one straightforward simile. On the other hand when Radka sings her version, she transforms it into a kind of celebration of the beauty of the natural world connected to the human social world and even beautifully captures the sensation of the Lepidopteral aimless drunken fluttering with her singing.

Like Nick Drake, like Sylvia Plath, or Kurt Cobain, Radka's works can be described also as the 'longest suicide letter' ever written. She was one of those artists that took profound suffering and crafted the most beautiful art out of it, to appease her own inner demons. Out of suffering came great beauty like an alchemist taking clay and making gold, as Beethoven's life is often described.


In Nikki's "Winter Poem" a snowflake falls on her, becomes a web of snow, and then melts into spring rains to water herself as a flower.  Simply, a fantasy poem.  What did Radka do with it?  She reinterpreted the whole concept such that the snow becomes like a casing of ice and the spring rains that fall on her are watering a flower on her grave.  The sadness she imparts to the single word 'happy' suggests suicide and the combination and layering of her voice in a cappella chords evokes a choir singing in a church.  This is real artistry.


We love you, Radka Toneff, and I wish that the whole world would enjoy the beauty of your art as much as those like me who are your late fans.  In Canada a similar female artist called Fabienne Thibeault also made three albums in the last seventies that are utterly perfect in their gem-like beauty though in her case the music is based on folk rather than jazz.  Her intense feeling for emotional expression and beauty reminds me of Radka, but with less of the melancholy.  If you enjoy the Bulgarian Norwegian, you will probably also enjoy the work of Fabienne who may be less known.

I want to apologize if I offended any fans of Nikki Giovanni by using her in this comparative manner.  I was mainly impelled by curiosity to hear her original LPs.  Because these are widely available, presumably entirely on youtube too, the two albums linked below will only be available for a very short time.

Nikki is now a highly regarded literature professor at an American University.
Radka committed suicide at the age of 30 on October 21st, 1982.