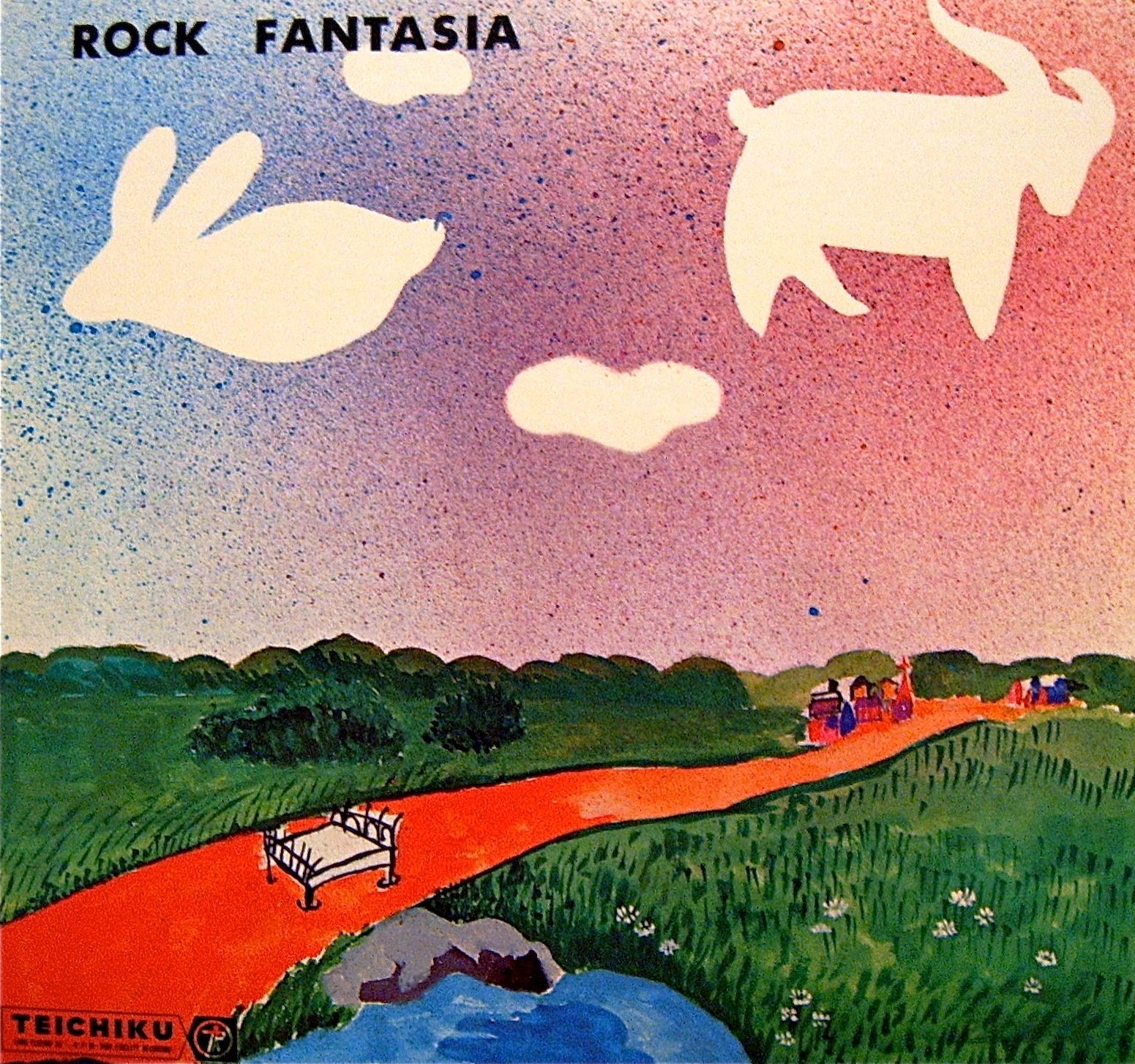 Truly a beautiful cover painting if ever I saw one.  Let us start, as we often do, with Tom's review of a partial listening, from December 11th, 2014:

I've been sitting on "Rock Fantasia" for awhile. This came via a tip from Laser Ken a couple of months ago. I've only heard one side of the album, but it's really quite an amazing side! We've been talking about the early 70s Japanese underground for a few years now on the CDRWL. It's amazing to me just how many treasures there are to be found over there - and they are all ridiculously obscure. In the last few years, we've seen CD reissues of these gems - always limited and expensive. But they've been worth the time, money, and effort for me at least. Perhaps this will be another title we will see? I hope so...

Here is the description that came from the dealer that was selling this (and where I got the sound clip, which is no longer available.... however for the clever amongst you, do a Google search and use the cache feature...).

"The monster Japanese progressive psych LP...!!!! Same series of "S.Tanaka - British Rock Live" LP by Teichiku label. Pink Floyd type progressive rock music. The arranger is Yusuke Hoguchi! He is the leader of People - Ceremony"Buddha meet rock"!! Sound Creation is a secret band. All band member's names are hidden. The inside of the sleeve has liner notes. Even the reviewer of the liner notes does not know it. However, I think the band is same of "Buddha meet rock."...! Because the arranger is Yusuke Hoguchi... If it is right, the guitarist is Kimio Mizutani!!!! This LP is really rare, so Pokora's book does not list this LP yet."

Well there you have it. When he says "Pink Floyd type progressive rock music", he means "Ummagumma" era. This is the good stuff. Space rock with a psychedelic freakout backdrop provided by no less than the legendary resident freakmeister himself: Kimio Mizutani.

Priority: 1 or 2  (if it's like the track I heard, we'll go Priority 1... but for all I know Side 2 is a choral piece, or children's music, or God knows what. The Japanese albums from this period are crazy like that. Even if that's the case, it's worth a CD for the one side which is over 20 minutes long).

The AC has also chimed in regarding this band with his usual expertise on the Japanese scene: "As you suspected, it was your typical exploitation studio project that was so common at the time in Japan. It was indeed another Yusuke Hoguchi-led session (People, Mannheim Rock Ensemble, etc.), and was actually the second Sound Creation LP. The first one was also released on Teichiku (in '71) and was called (wait for it...) "Progressive Rock"! (scan attached). Anyway, both of these were basically covers/arrangement albums, but given the psychedelic "New Rock" makeover. As you might expect, the side that the dealer featured is the more interesting of the two. "


I will have to disagree with the above and tell you that the second side, a long track with the songs listed below, is quite impressive if you take it on its own terms.  Yes, it comprises recognizable melodies, but seamlessly it creates quite a magical progressive experience when heard from beginning to end, like Pink Floyd did on the long tracks "Shine on...".  The first record (misleadingly called "Progressive Rock"), also cover tunes, is completely forgettable and not even worth a second listen, surprisingly.  Not even worth searching for.  It's this second record that is the masterpiece.

So in the comments I will include the first side, freely available, which was heard by Tom above.