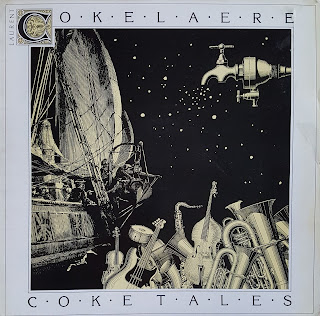 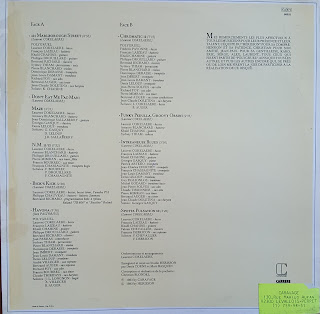 Bassist Laurent Cokelaere composed all the music for this record, except for the Weather Report (Jaco Pastorius) track called Havona and a fantastic track that is too.  It's a wonder he didn't write more before. I guess he played in the Yoch'ko Seffer group which explains the huge amount of progressive ideas. I looked through the bands in his discography, though that might not be complete, and there's not much else of interest other than the follow up live Minigruel en Concert album from 1985 (which will be here shortly).

It's a beautiful album cover, you can see they collaged old engravings from 19th c. French artist Gustave Dore on an outer space background to wonderful effect. Very original too.  The title of the album must have been such a hilarious punnish joke to all those present, given the times, today, it just seems silly.

I think you can consider the music a cross between the funky guitar fusion of Alain Renaud recently compiled here and the Jeanneau big band jazzier style of fusion posted multiple times here in the past.  What's beautiful is the way he keeps the funk in the mix, front and centre, whilst using such a great band full of brassy arrangements in the background-- Cokelaere did the orchestrations and arrangements too.  It's a remarkable sound and hugely, highly enjoyable for myself, with the warmth from commercial-pop funk permeating through and through the more intellectual, jazzier elements. All instrumentals.  To my surprise the band, which is called Polygruel, has 21 members.

For ex. in the track called  Funky Pedulla, Groovy Orsini which was obviously built around a funky bass riff notice how the guitar brings in tritones after the opening, eventually developing with the synth a wonderful circular obligato kind of pattern:

An example of the progressive songwriting is part b of the delightful Don't Eat me Pacman! composition (I guess taking the video game from the point of view of the ghosts?) such a sign of the times too:
A bit surprising that it was never released to CD?