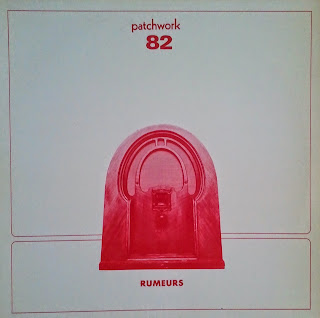 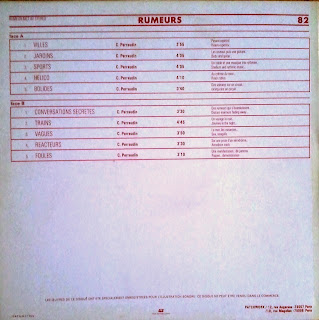 Hard on the heels of the last library entry that was so popular here's another famous name and another marvelous little album that I take it was missing.  An unusual feature is the musique concrete or real-life sounds that begin each track.  Mercifully these noisy interludes are quickly over (on the order of 65 seconds) so we can focus on enjoying the music.

All compositions are by Claude, obviously.  More information can be found in discogs.  For those unlucky souls not familiar with this artist, here is his extensive discography with his masterpiece, universally acknowledged, being Mutations 24 -- a work that I have listened to hundreds of times and could listen again the same number of times.  If you haven't heard it, please do so!

The first track called Cities is described as Heavy-repetitive:

As indeed it is.  Whilst notice the synthesizer sounds evoking locomotives on the Train track (pun obviously intended though as is customary, categorically denied):

Some tracks, of course, are simple throwaway, as might be expected on any library album, the song called "Vagues" or waves sounds like something Jean-Michel Jarre would have done but never released as it was too inferior to the rest of his admittedly poor work.  And the last track referring to "Foules" or crowds could easily have been the Hollywood soundtrack to a Pinocchio remake starring Jean-Claude Van Damme as the title character action hero wooden puppet with the hardest arms ever and Angelina Jolie as the old professor, with the whale created by CGI animation out of an old sardines can.   Needless to say when he gets down to the children's hell he beats up all the bad kids and even closes hell down by the deputy sheriff, along with real life authority and friend Steven Seagal.  Cameo by Megan Fox as the love interest: a living barbie doll called Malisa with plastic breasts.  You go, Jean-Claude!