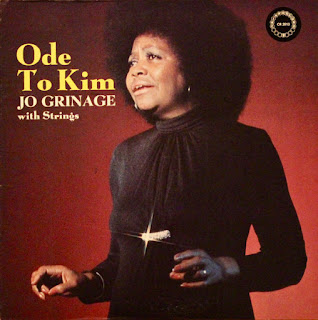 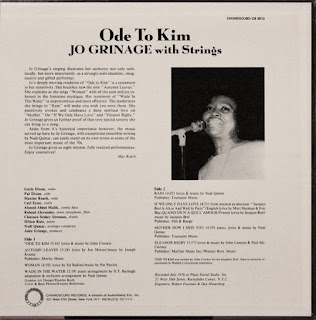 Something by her was requested in the past, I think a couple of times.
Definitely she sounds very much like Nina Simone in her later (seventies) days, an artist whom I absolutely adored back in the days when I was 'into' American jazz.  Long before she became cool on Starbucks playlists.

She made two albums only, the first of which is pricey while this one, which I think might be superior, is not at all expensive.  That's such a typical circumstance in old LPs isn't it: 20 buck masterpiece, versus overpriced garbage.  You can observe that it's mostly made up cover versions, including the abhorrent Autumn Leaves, and the somewhat less so though still nauseatingly overplayed Eleanor Rigby.

On the other hand, there are some hit-it-out-of-the-ballpark tracks, like the Ode to Kim:

One more, Mother How I Miss You, very emotional in the spiritual sense:

Reminds me too of the brilliant Roberta Flack, whose misfortune like so many others was to become 'too famous' for the one song First Time ever I saw Your Face, when in her older (first 2) albums there were such incredibly tender compositions.

It's worth noting the last two sampled tracks were written and arranged by one Nadi Qamar, noted here.
And you might detect an Alice Coltrane vibe to the string arrangements too, which is never a bad thing, never...
Thanks for suggesting this artist, whoever requested. So odd to me that Nina is so overplayed and artists like this, just as good, are unknown, totally. It's as if the music-listening public is made up of tired old men who can't tolerate novelty and can only hear familiar trite songs they already know and have heard many times.