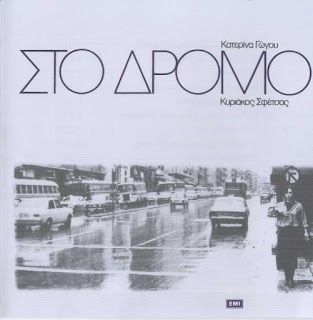 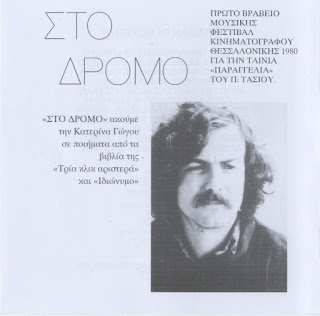 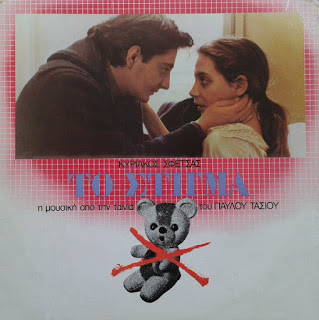 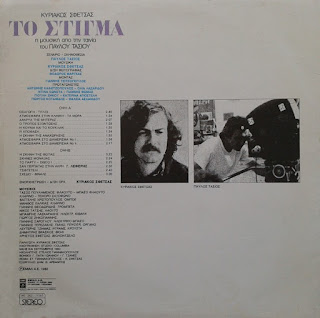 So I guess the lesson is we (I) have to look carefully at all the comments, because in my post of Greek Fusion Orchestra (which you may recall was led by composer Kyriakos Stefsas) apps mentioned two other works from him that came later which I at the time dismissed, but here they are.

The first of these appeared in 1981 and he provided backing music for Katarina Gogou's poetry, much like US poet Nikki Giovanni's album with backup music by legendary composer/arranger/record producer Arif Mardin.  You'll instantly get an idea of the overall feel for this unique album when you hear the first track:

Note how angular and modern classical this music is, especially when side by side with the Greek Fusion O. more jazzy material, displaying eminently his presumed university musical education.  This is one album I'll relish, exploring over a great deal of hours each of these ideas and their nuances.

Secondly we have the 1982 OST To Stigma which is made of many short instrumental tracks, again very much in the modern classical vein but set to soundtrack. First track:

Overall, it reminds me a bit of Austrian Michael Mantler's wonderful seventies modern classical, quasi-atonal music which he made esp. the ones with Wyatt doing the singing.  Btw, notice the very disturbing plot synopsis over on imdb for this movie. (Briefly, married couple kills their baby with Down's syndrome.) Oh, for those days of intelligent movie-making, before cartoons and Marvel comics took over...

I'm going to let apps take this one out with his great review on rym which I do recommend you read through:

''Sto dromo'' is one of the most unique albums in the history of Greek Music, released in 1981 on EMI.The soundtrack of the dramatic movie ''Paragelia'', directed by Pavlos Tassios, it features his wife Katerina Gogou on lyrics and narration, while the music was written and arranged by composer Kyriakos Sfetsas.  Gogou (born 1940) began her career as an actress, playing in plenty of 60's movies, before becoming a passionate poet with anti-political and anarchic activity.  Sfetsas (born 1945) was among the very talented composers of the time with a varied background on symphonic, Jazz, Chamber and Ethnic Music.  He conducted an orchestra of 10 musicians on this album.

You should have good knowledge of the Greek language to fully appreciate this album, because one of its most intense and deep extensions are Gogou's allegoric, social lyrics with certain attacks against the political system and very depressive texts, even the optimistic farewell message is narrated in such way that creates only melancholic, social-friendly feelings.  The music is an impressive blend of jazzy Progressive Rock and Greek Folk, featuring beautiful jazzy orchestrations and ethereal melodies, which often come with complex moves and flawless interplays.  The traditional violin, clarinet and santoor notes add to the album a great Mediterrenean touch with an atmospheric depth and the electric textures sound very tasteful with nice guitar/piano interactions.  ''Sto dromo'' has a strong Avant-Garde feel throughout because of Gogou's sinister vocal work and the R.I.O.-friendly sounds with the dominant piano and string sections.  Although Gogou appears in every corner of the album, the music is so dynamic and varied you can't simply pass by.  It gets very complicated in certain moments with big horns and string sounds, but on the next track the listener will meet with soft, jazzy arrangements and some amazing folky-tinged soundscapes.

Sfetsas remained in the forefront for some years after the album, his music has been heard worldwide for its impresive and cinematic edges.  Gogou's anxious spirit faded away in October 1993, when she commited suicide, struggling to keep up with her temperamental state of mind.

Fascinating mixture of Greek poetry and jazzy Prog Rock with nice folky touches.It is strongly recommended to find a translation of the lyrics, before purchasing the album.Highly recommended, no doubt Greek listeners should have this one in the top place of their collection.